I like things to be done my way. There’s a little plaque sitting on the kitchen bar that says “I’m not bossy, I just know what you should be doing.” I’m sure some psychologist or psychiatrist or counselor will read that line and say, “Oh, she has control issues” …. and they will be correct in their assessment. Just don’t get too comfortable in that diagnosis until you have walked in my shoes for a bit.

“Don’t be selfish; don’t try to impress others. Be humble, thinking of others as better than yourselves. Don’t look out only for your own interests, but take an interest in others, too.” – Philippians 2:3‭-‬4 NLT

As far back as I can remember, I was trying to impress someone. My older brother and I are very close in age, and as children we were often mistaken for twins. I was thrilled to be seen as his twin; He detested it. My goal in life as a little girl was to be included in whatever he was doing, and I think his goal was to get away from his pesty little sister! Fairly typical, I would imagine …. not many boys want a ” lost puppy” little sister following them around all the time.

That need to be accepted followed me into young adulthood. I was a Christian, having accepted Jesus as my Savior at an early age. In my childs mind, I wanted my brother to love me like Jesus did. Now I know how impossible that is. No human can possibly love like Jesus did, like He DOES! Instead of resting secure in the ccompleteness and Love of Jesus, I began a lifelong search for the impossible: a man to love me and take care of me, one I could physically hold on to. Boy, did I hold on! I made choices based on looks and on how they made me feel needed. After they got what they were after, whatever it was to them, I would be left adrift in a sea of despair and helplessness. My solution? Reach for another man. While I was wallowing in that desperation, I lost the ability to stay in contact with my family and friends. I lost people and things that were precious to me; I lost my health and I lost my SELF in all the mess. I kept on grasping at the people and things that were keeping me adrift instead of accepting the hand of my Savior, Who was standing right next to me the entire time. The Savior I refused to look at or acknowlege.

That’s about as selfish as a person can be. We keep ourselves so busy doing whatever we have decided is best for us, working on the most favorable impression to those surrounding us, wanting more and more “stuff.” (Have you seen the number of storage places around us???) How much more selfish can we be? Shouldn’t we be concentrating more on what God has to say?

“Therefore God also has highly exalted Him and given Him the Name which is above every name, that at the Name of Jesus every knee should bow, of those in heaven, and of those on earth, and of those under the earth, and that every tongue should confess that Jesus Christ is Lord, to the glory of God the Father.” – Philippians 2:9‭-‬11 NKJV

Am I exalting Him in my life, or am I exalting myself? Am I content, or still grasping for world ingredients regard and approval? Am I ready to worship the LORD instead of the world yet? I want to join in this song!!

“And then I heard every creature in heaven and on earth and under the earth and in the sea. They sang: “Blessing and Honor and Glory and Power belong to the One sitting on the throne and to the Lamb forever and ever.” – Revelation 5:13 NLT 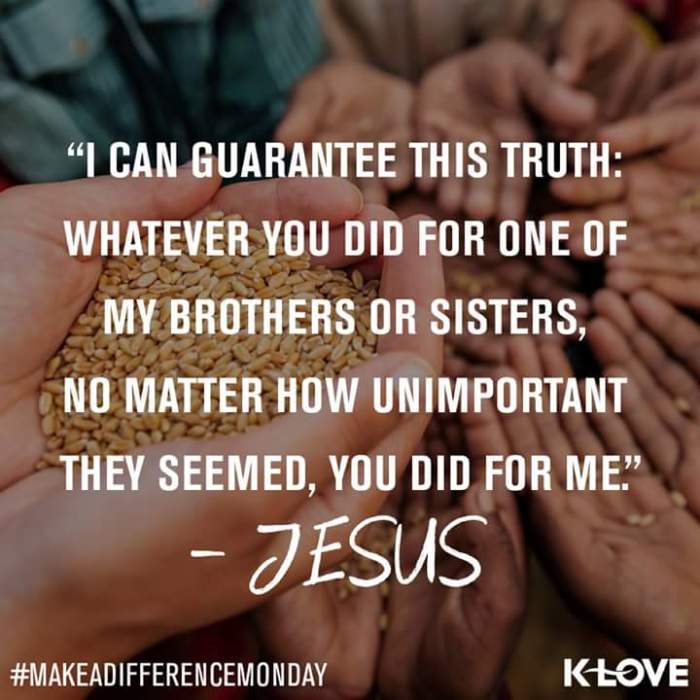