“GOD Blesses those who patiently endure testing and temptation. Afterward they will receive the Crown of LIFE that GOD has promised to those who love Him.“- James 1:12 NLT (Note that it does NOT say “GOD helps those who help themselves.”)

Even though James thought he was writing to his contemporaries; fellow Jews who had been scattered throughout the known world, GOD’s message for him was to be sent through the ages. What James says looks eerily like it was written specifically for us today. For a person of true integrity, when he or she stands before the Great White Throne, waiting to be judged by Almighty GOD, there shouldn’t be many secrets hiding in their heart’s ‘closet’….. However, the outwardly righteous man, or the public presentation of integrity by a woman, could very well be hiding a closet stuffed to bursting with things that are secret and that they don’t want to reveal in the perfect Light coming from the throne. GOD sees past the facade we put up to fool other humans – and it is never a pretty sight.

Integrity defined: “the quality of being honest and having strong moral principles; moral uprightness; the state of being whole and undivided.” – from Google Dictionary

Jesus warns His followers, then and now:

“The time is coming when everything that is covered up will be revealed, and all that is secret will be made known to all. Whatever you have said in the dark will be heard in the LIGHT, and what you have whispered behind closed doors will be shouted from the housetops for all to hear! Dear friends, don’t be afraid of those who want to kill your body; they cannot do any more to you after that. But I’ll tell you Whom to fear. Fear GOD, Who has the power to kill you and then throw you into hell. Yes, he’s the one to fear.” – Luke 12:2‭-‬5 NLT

Remember the story of David and Bathsheba? This man, who has been declared to be a ‘man of GOD’s own heart’, was an adulterer and he had her husband murdered in order to cover his transgression. A ‘man of GOD’s own heart’, who tried to cover his secrets and hide them from the ALMIGHTY, ALL-SEEING GOD. Do you recall how well his secrets remained hidden? Not long. Days, weeks, maybe a few months, but it all came to the light – and the consequence of those sins was that their son, their firstborn, died.

“The time is coming when everything that is covered up will be revealed, and all that is secret will be made known to all.” – Luke 12:2 NLT

Could our LORD make it any more clear? Whatever the secret, it will be brought out into the Light. Now is the time to open your heart’s door and allow the HOLY SPIRIT clean out the cobwebs; to open all of those secret places in your mind so that He can do a thorough cleaning. He wants us to be sparkling clean when we stand in front of the Judge, but He will not force us to unlock all those doors. The more you keep them closed up and locked up, JESUS’s death and resurrection can’t completely cover our secret sins.

Are you holding them closed and living your life looking back at them, so you won’t ‘forget’ how bad it/you were? GOD is a gentleman and won’t force us to open the door(s) in this life – but ultimately, when we stand in the box to be judged, those locks will pop open and everything will be revealed. Won’t it be good to not have any secrets to bring to the Light? I encourage you to unlock them and let the Holy Spirit do a clean sweep, right now, today! Listen to Steve and Annie Chapman sing “The Secret Place.” Even now, after hearing it for almost 30 years, it brings tears of joy to my heart. (You’ll have to Google it, or go to YouTube)

Open the door to your secret place. That’s when you find true Hope and Healing – the ONLY Way, through JESUS. 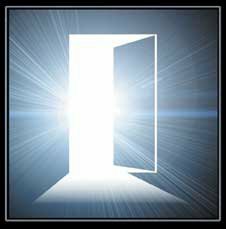