Someone said that if he were to find the ‘perfect’ church and join it, it would no longer be perfect. I wonder at the churches – and church members – who think they are perfect and better than others. Why, how, could anyone think that an assembly of humans could possibly be perfect? Then there’s the other side, the person who refuses to be a part of any church “because they are all made up of hypocrites.” Um, duh. (Sorry. My sarcasm slipped out!) Seriously, how can a church NOT be made up of anything besides prodigals, sinners, and hypocrites?

The only thing that separates the church-goer, the true Christian, from the world is JESUS CHRIST, The LIVING HOPE!

In Luke 15, JESUS is disrespected by the Pharisees, those men who were stuck so rigidly to the Law that they were unable to see the MESSIAH Who was right in front of them.

“Now all the tax collectors and sinners were coming near to listen to Him. And the Pharisees and the scribes were grumbling and saying, ‘This fellow welcomes sinners and eats with them.’ “
Luke 15:1‭-‬2 NRSV

Horrible horrors, GASP! JESUS sat down to eat and commune with these despised Jews. He spoke to the people there and told them these stories. There was a woman who had 10 silver coins. She lost one and searched her home until she found it, then celebrated with her neighbors. He tells of the shepherd who has 100 sheep, and leaves the 99 sheep in the wilderness in order to find the lost one. He rejoices because he found it. Finally, He tells the story of the prodigal son, a story I think we have all heard. This son took his inheritance and left his home, then wasted and squandered the fortune. Even though he had sinned against his father, when he returned home in defeat, his father ran to greet him and celebrate his return.

“…. But we had to celebrate and rejoice, because this brother of yours was dead and has come to life; he was lost and has been found.” – Luke 15:32 NRSV

Every person to ever draw breath is a sinner; a hypocrite. Maybe we are all prodigals. I am all of these and more. I’ve shared my story of growing up in the church, of being raped and abused, and consequently turning my back on the GOD Who allowed it all to happen. I was a sinner in the lifestyle I adopted; I am a hypocrite, because I know the Truth but I often forget to live it. I need to allow the LIGHT of my LORD shine through my ‘cracks.’ I am a prodigal who has squandered much before finally returning to the LORD after my 40 years of wandering in the wilderness of sin and the Enemy.

Oh, that we would welcome every prodigal, every sinner, and every hypocrite into all of our houses of worship! We, as the Body of CHRIST, should be running to greet ‘those people’ as soon as we see them. Unfortunately, much of the time, we – the prodigals, the sinners, the hypocrites who make up the church – run away from ‘those people.’ I have witnessed it over and over, and I confess to having done it myself. When I truly returned to my LORD – and I had many false starts – I was Blessed to land in a church that wholeheartedly supported a great recovery program and pastor. I am one of ‘those people’ ….. but because I don’t show how ‘bad’ I had been in my outward appearance, people in the church are often shocked when I share my testimony. I have been found; saved through the Grace and Mercy of our LORD.

LORD, show us how to be the woman searching for her lost coin, the shepherd searching for his lost sheep, and especially the father running to meet his child. JESUS is our Shepherd, and we are like the sheep. We should share His Love and Mercy and Grace, and welcome the lost with open arms as they are brought in by the Shepherd. Do you open your hearts, or do you shut the door in their faces? 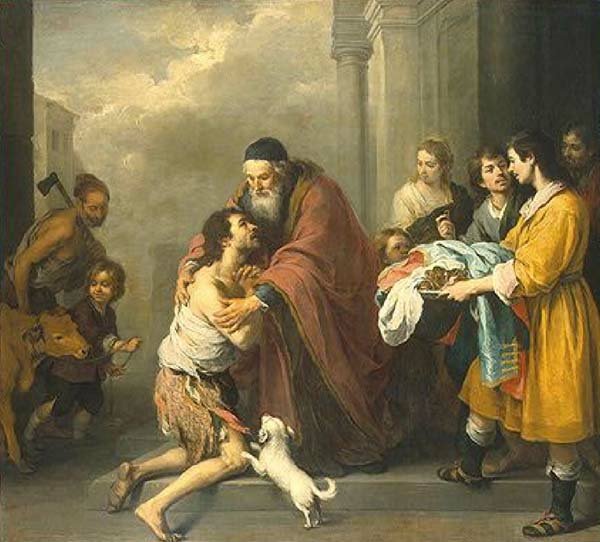 3 thoughts on “Prodigal, Sinner, and Hypocrite”