“When it was day, the Council of elders of the people assembled, both chief priests and scribes, and they led Him away to their council chamber, saying, “If You are the Christ, tell us.” But He said to them, “If I tell you, you will not believe; and if I ask a question, you will not answer. But from now on the son of man will be seated at the right hand of the power of God .” And they all said, “Are You the Son of God, then?” And He said to them, “Yes, I am.” Then they said, “What further need do we have of testimony? For we have heard it ourselves from His own mouth.” ” – LUKE 22:66‭-‬71 NASB

He doesn’t hesitate to say the words that condemn Him to the most gruesome death imaginable. Would you be so bold?

“Then the soldiers of the governor took Jesus into the Praetorium and gathered the whole Roman cohort around Him. They stripped Him and put a scarlet robe on Him. And after twisting together a crown of thorns, they put it on His head, and a reed in His right hand; and they knelt down before Him and mocked Him, saying, “Hail, King of the Jews!” They spat on Him, and took the reed and began to beat Him on the head. After they had mocked Him, they took the scarlet robe off Him and put His own garments back on Him, and led Him away to crucify Him. As they were coming out, they found a man of Cyrene named Simon, whom they pressed into service to bear His cross. And when they came to a place called Golgotha, which means Place of a Skull, they gave Him wine to drink mixed with gall; and after tasting it, He was unwilling to drink. And when they had crucified Him, they divided up His garments among themselves by casting lots. And above His head they put up the charge against Him which read, “THIS IS JESUS THE KING OF THE JEWS.” – MATTHEW 27:27‭-‬35‭, ‬37 NASB

After a night of being beaten and mocked, Jesus is brought in front of the authorities. I can only imagine the dignity with which He must have carried Himself as He was brought into the chamber. He knew what would happen to Him, yet He refused to cower or deny the Truth.

I would be that honest and forthright in my bearing and my witness: plainly spoken. 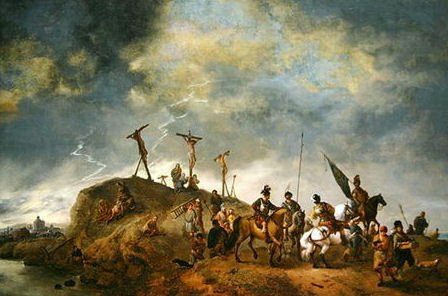 One thought on “Plainly Said”