What are the scariest words you have ever heard? You’re fired? You’re hired? Marry me? …… We’re pregnant? Your loved one is dying?

All of those words have definite impact on our lives, but I don’t think they are the scariest you’ll ever hear. Knowing just how flawed and imperfect we are as humans, try these:

“If, however, you are fulfilling the royal law according to the Scripture, “you shall love your neighbor as yourself,” you are doing well. But if you show partiality, you are committing sin and are convicted by the law as transgressors. For whoever keeps the whole Law and yet stumbles in one point, he has become guilty of all. For He Who said, “do not commit adultery,” also said, “do not commit murder.” Now if you do not commit adultery, but do commit murder, you have become a transgressor of the Law. So speak and so act as those who are to be judged by the Law of Liberty.” – JAMES 2:8‭-‬12 NASB

No matter how good we are, we are guilty of breaking all of God’s laws. ALL of them. Ever told a “white” lie? Took a paperclip that really didn’t belong to you? Shared a bit of “harmless” gossip? “Admired” someone of the opposite sex just a tad too long? Became angry or took offense at some slight? By stumbling on one point of the Law, we become guilty of breaking it all.

Matthew Henry’s Concise Commentary: “According to the covenant of works, one breach of any one command brings a man under condemnation, from which no obedience, past, present, or future, can deliver him. This shows us the happiness of those that are in Christ. We may serve him without slavish fear. God’s restraints are not a bondage, but our own corruptions are so. The doom passed upon impenitent sinners at last, will be judgment without mercy. But God deems it his glory and joy, to pardon and bless those who might justly be condemned at his tribunal; and his grace teaches those who partake of his mercy, to copy it in their conduct.” (Emphasis mine)

According to my understanding, the Law of Liberty is the Gospel. Through the Mercy shown to us in and through Jesus Christ, we receive forgiveness…… but we must accept that Mercy, that Gift, in order to receive His forgiveness, and to be freed from the final judgement of the LORD. I don’t want to be seen as a “good” person! I want people to see – and know – that I am forgiven; and how I am forgiven. That’s why we must share the Gospel. “Good” can never be good enough; only forgiveness will suffice in the end.

Are you good, or are you forgiven? 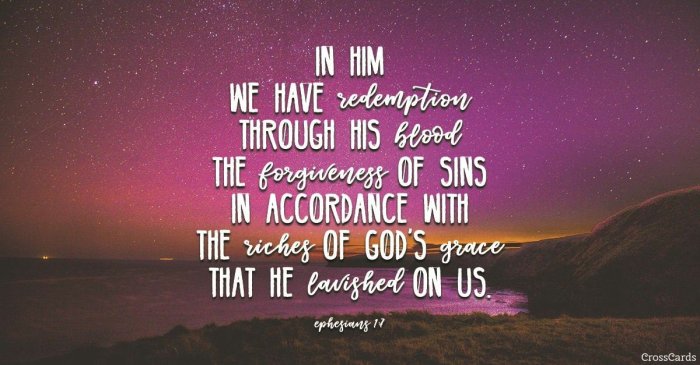